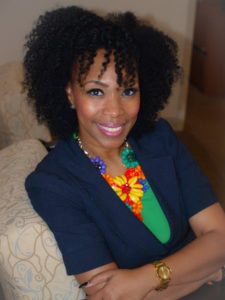 “I knew when I started in the League that I would pursue opportunities in leadership,” Smith said. “I enjoy mentoring, leading, and empowering others.”

The Nominating Director coordinates and oversees all functions of the Nominating Committee, including the preparation of the slates of candidates for election and appointment of committee chairs, chair-elects, conference delegates, task force members and any other positions. Vontifany began her League career as a member of Family And Children Together (FACT). She stayed on the committee for over four years and served as the chair-elect and chair before it phased out of the service projects sponsored by the League.

Through her own experience as a single mother at age nineteen, Vontifany became committed to assisting, empowering, and encouraging the young mothers that participated in FACT.

“I really felt lives were changed in that committee, mindsets were turned around, and young parents were provided resources that would not commonly be accessible to them,” Smith said.

She also served on Admissions and New Member Training as a new member mentor and on the executive board as training director.

When she isn’t working for the League, Vontifany is an Organizational Development Trainer at Arkansas Children’s Hospital and also uses her skills as a professional development, image, and independent wellness consultant.

Being a League member has made a tremendous impact on Vontifany. Whether it’s establishing long lasting relationships with other League members or watching the organization become more culturally diverse, being a part of the league allows her to become an effective change agent in local communities through service.

“In my new position, I hope to enhance my knowledge of policies and procedures. I hope to become familiar with more members by name and face, to establish relationships with members and leaders and offer support as needed, and help to carry out the duties of my role and my committee’s role as expected,” Smith said.

During her tenure as Nominating Director, Vontifany plans to continue to serve with excellence and dedication. It is her hope that she will continue to learn, grow, bond with more like-minded women, and serve her community effectively.

The Junior League of Little Rock is an organization of women committed to promoting voluntarism, developing the potential of women and improving the community through the effective action and leadership of trained volunteers. Its purpose is exclusively educational and charitable.

Our Commitment to
Diversity and Inclusion

The Junior League of Little Rock welcomes all women who value our Mission. We are committed to inclusive environments of diverse individuals, organizations and communities.

By continuing to use the site, you agree to the use of cookies. more information